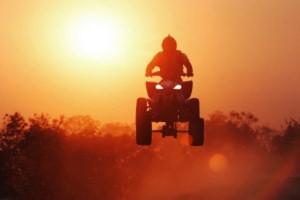 Some 70,000 acres of public land in California that has been off-limits to off-highway-vehicle riders since 2008 could reopen.[/caption]

Some 70,000 acres of public land in California that has been off-limits to off-highway-vehicle riders since 2008 would reopen under legislation introduced by U.S. Rep. Sam Farr (D-Calif.), the American Motorcyclist Association reports.

On Aug. 2, Farr introduced a H.R. 6286 that would designate the popular Clear Creek Management Area near Hollister -- which is controlled by the U.S. Bureau of Land Management -- as a National Recreation Area. If the bill becomes law, it would provide for recreational access to the land as allowed under the BLM's 2005 travel management plan.

The San Benito County Board of Supervisors has been at the forefront of the movement to reopen the popular OHV area, petitioning Congress to consider Clear Creek a National Recreation Area that would allow motorized and non-motorized recreation.

Western Representative Don Amador of the BlueRibbon Coalition, a national trail-based recreation group, has also been hard at work in an effort to reopen the land.

"It's very rare for legislation to be introduced in Congress to open riding areas to riders," said AMA Western States Representative Nick Haris, who has worked with Amador on the issue. "Rep. Farr and the San Benito County Board of Supervisors deserve the thanks of all OHV enthusiasts for their efforts. And I personally want to thank Don Amador for his tenacious work in this area.

"With the elections coming up, I think it's very important for California OHV enthusiasts to ask political candidates where they stand on this proposal," Haris added. "We need to hold them accountable on this issue."