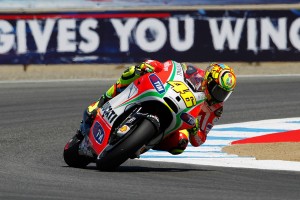 Laguna Seca was the first time Valentino Rossi mentioned Yamaha by name as one of his "other options".[/caption]

While Valentino Rossi's official announcement about his team affiliation for next year is still more than a week away, speculation is already running rampant that the former MotoGP champion could be returning to Yamaha.

According to Cycle News, Rossi acknowledged he had spoken with Yamaha for the first time at the U.S. Red Bull Grand Prix. Previously, Rossi was purposely vague in his comments about next year, simply saying he had "other options." Laguna Seca was the first time Rossi mentioned Yamaha by name. The Italian rider also said he was no longer angry with his former team for choosing current MotoGP points leader Jorge Lorenzo over him in 2010.

Meanwhile, Yamaha race boss Lin Jarvis told the news source "anything is possible," when asked about a potential Rossi return to the team. All of this, coupled with Rossi's growing frustration with Ducati, seem to be pointing toward a Yamaha-Rossi reunion.

The odd man out in all of this could be Andrea Dovizioso, who is quietly having the best Yamaha Tech 3 season of all time and is fourth in the standings. Dovizioso thought he was the easy choice to replace Ben Spies on the Factory Yamaha team, but recently told MotoGP.com that with Rossi "really close" to snagging the spot he may have to look elsewhere.