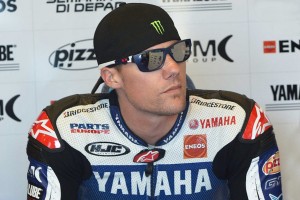 Ben Spies, racing in front of his hometown crowd, continued his disappointing season with Yamaha.[/caption]

Ben Spies and Valentino Rossi, two racers whose future in MotoGP is unknown, had a terrible race at Laguna Seca as MotoGP heads into a two-week break.

Spies, racing in front of his hometown crowd, continued his disappointing season with Yamaha, which is now confirmed to be his last. It's unknown if Spies will be remaining in MotoGP or moving on to a different series, but the race at Laguna Seca didn't do much to give any MotoGP outfits confidence in the American rider.

The Yamaha racer was on track for his best finish of the season, in fourth, when he fell off the back of the bike on the 22nd lap. It was later revealed his bike had a broken swingarm. Spies, meanwhile, may have broken his heel during a qualifying run over the weekend, with the injury to be assessed during the break.

Meanwhile, former MotoGP champion Valentino Rossi fared little better. The Ducati rider says he will announce his future in MotoGP after the break, with many speculating he will ditch Ducati, where he has never won, to take Spies' place at Yamaha.

With the Italian team hoping to convince Rossi to stay, Laguna Seca did not go their way. Rossi was in eighth place when he crashed later in the race, and ultimately wasn't able to finish.