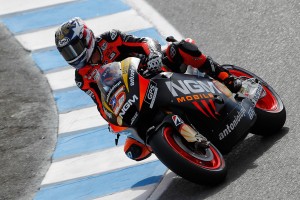 Colin Edwards, riding for Suter-BMW, believes his bike is holding him back from better finishes.[/caption]

American rider Colin Edwards has never been one to pull punches when talking with the media, and the story was no different during a recent press conference for his CRT team, reports Crash.net.

Edwards, a former MotoGP factory rider, was thought to be the poster boy of the new CRT teams, as he is the biggest name on one of the non-prototype bikes. So far, however, that hasn't worked out very well for Edwards, who finds himself 13th in the standings.

The Texan, riding for Suter-BMW, believes his bike is holding him back from better finishes, as he watches Aprilia-based CRT teams finish ahead of him. When one reporter asked Edwards about his "tough" season thus far, the rider didn't hold back.

"My bike is a piece of [crap]. That'd be a better way to say it," Edwards told Cycle News.

Edwards went on to rant about the new CRT rule, saying that there was a huge performance gap between the CRT teams and factory riders. The competitor also hinted Suter could move to an Aprilia bike before the season is over.

"I've heard rumors that we're getting on an Aprilia in Indianapolis," he told the news source. "I still won't be able to compete with these guys, but it's the best CRT bike out there at the moment so if that happens that's a step forward."