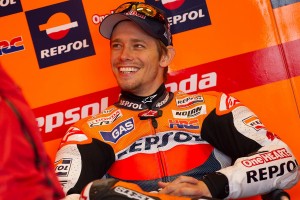 "I've had a lot of great races with [Jorge Lorenzo and Dani Pedrosa] over the years and I think our rivalry takes us to a very high level," Casey Stoner[/caption]
With his retirement looming, Australian MotoGP rider Casey Stoner reflected on the rivalry between himself, Jorge Lorenzo and Dani Pedrosa that has dominated much of his time in motorsports, including this season.

The three riders have been trading wins back and forth this year, and currently occupy the top three positions in the MotoGP point standings. Although Stoner and Pedrosa are teammates, the two have always had a friendly rivalry dating back to the 125cc and 250cc competitions. Stoner and Pedrosa both came to MotoGP in 2006, while Lorenzo followed in 2008.

Since then, Valentino Rossi is the only other MotoGP rider to have won multiple races - and he's fallen off considerably in the past two seasons. Most of the time, it's one of the three on top of the podium.

"I'm actually quite happy to have grown up and come through the different categories with these two," Stoner told Crash.net. "I've had a lot of great races with them over the years and I think our rivalry takes us to a very high level. Sometimes other riders are able to really stick it in there with us. Beat us. But we normally end up pushing each other to the front, and keep pushing each other further."