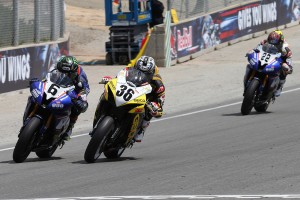 Cameron Beaubier looked like an old pro as he bided his time behind Martin Cardenas for 19 of the 20 laps, before executing an expert pass to claim the victory - Photo: Brian J. Nelson[/caption]

Although Martin Cardenas is in commanding lead of the point standings in Daytona Sportbike, 19-year-old Yamaha Y.E.S. Graves rider Cameron Beaubier is proving he may be the future of the sport with a string of victories, the most recent of which was at Laguna Seca.

The young phenom looked like an old pro as he bided his time behind Cardenas for 19 of the 20 laps. On the second turn of the final lap, Beaubier faked going to the outside before slipping inside of Cardenas, executing an expert pass to claim the victory.

With the win, Beaubier has now won four of the past five races, but it may not be enough to catch Cardenas. Two DNFs coupled with two sub-20 finishes have all-but sunk Beaubier's hopes of a championship, unless Cardenas suffers an injury of some kind.

However, the win tied Beaubier for third with Tommy Hayden at 234 points and put him 16 points back of Dane Westby in second, who finished a disappointing 18th at Laguna Seca. Cardenas controls the standings with 314 points.