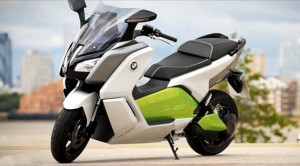 BMW is using the London Olympics as the staging ground for the launch of its C Evolution electric scooter prototype.[/caption]

German automaker BMW is using the London Olympics as the staging ground for the launch of its C Evolution electric scooter prototype, announcing that selected individuals will be able to ride the anticipated models at the games, two years ahead of their projected sales date.

Bloomberg BusinessWeek reports select journalists, BMW employees and "VIPs" will be given the scooters to get around the games. BMW has installed several charging stations for the limited number of riders to use at convenient access points throughout the city. However, the public model expected to be available in two years will be able to use normal sockets found in the home.

The C Evolution uses similar technology as the brand's upcoming i3 electric compact, and boasts impressive specs for a scooter. The C Evolution has a top speed of 75 mph and a range of 62 miles. BMW claims the model can keep up with a gas-powered scooter that has a 600cc engine.

While the prototypes being shown off at the Olympics aren't the final design for the vehicle, BMW told the news source the models that will be available in two years will be "very similar" to the versions that can be spotted riding around London now.