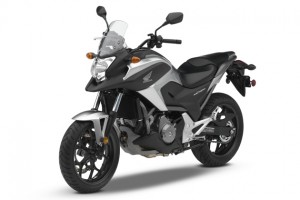 Honda unveiled the NC700X street bike at the New York International Motorcycle Show this past January, claiming the motorcycle would be at dealerships by summer 2012. Well, there's really just one month left in the season and I still haven't heard anything about the new bike actually being available for sale.

I, like many other riders, am anxiously awaiting the release of this bike so I can take it for a test drive. Big Red has touted the bike as an all-new edition to their lineup, unlike any other bikes on the road. They even made two versions, one with a standard six-speed transmission and the other featuring a dual clutch transmission that lets you alternate between automatic and manual which allows you to shift at the touch of a button. This model also comes with Honda Combined ABS so you can stop on a dime.

Another cool aspect of the design is the location of the massive 3.7-gallon gas tank directly under the seat that supposedly lowers the center of gravity. The spot usually reserved for the fuel tank has been converted to a storage space with enough room to stash a helmet so you don't have to worry about someone stealing your street bike accessories when the bike is parked. This also means you don't have to lug your motorcycle helmet along everywhere you go. 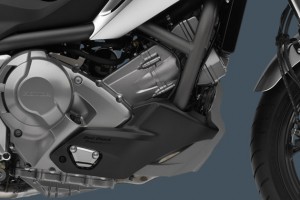 The all-new 670cc liquid-cooled parallel-twin engine has a 73mm bore and an 80mm stroke.[/caption]

The all-new 670cc liquid-cooled parallel-twin engine has a 73mm bore and an 80mm stroke. The addition of a balancer shaft as well as the Honda programmed fuel injection (PGM-FI) makes for a smoother ride. The PGM-FI electronically controls the fuel injection and alters it depending on the riding and atmospheric condition to ensure the engine is providing maximum power and performance. The balancer shaft is meant to diminish vibrations for a more comfortable ride, as well.

While it's still a mystery when this street bike will hit dealerships, I am keeping my ear to the ground so I can be one of the first to test drive this bad boy. Honda has disclosed there are many motorcycle accessories that will be available so you can customize the bike to your liking. The windscreen is even adjustable so you can account for your height if necessary. From where I'm standing, it sounds like Honda has thought of pretty much everything, but until I actually get to ride the bike there's no way to be sure.