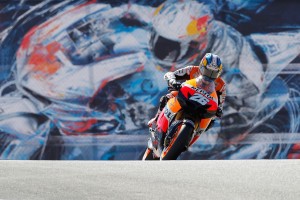 Dani Pedrosa set the best time with his penultimate lap, a 1:21.424-second speed run that was just a hiccup away from the course record.[/caption]

Dani Pedrosa took advantage of having access to the new RC213V and narrowly edged out chief rival and points leader Jorge Lorenzo during the morning session of Friday practice for this weekend's U.S. Grand Prix at Laguna Seca.

Lorenzo, who has taken the pole position on the past three races at Laguna Seca, dominated much of the morning session with his quick times around the track, reports Crash.net. However, Pedrosa set the best time with his penultimate lap, a 1:21.424-second speed run that was just a hiccup away from the course record.

Lorenzo was not far behind Pedrosa's time at all, finishing just 0.074 seconds behind the Honda rider. With Pedrosa just 19 points back in the overall point standings and the times so close in the practice session, the U.S. Grand Prix is shaping up to be quite the duel between the two riders.

That's not to count out the other member of Repsol Honda, Casey Stoner, who finished third in the morning session. As opposed to Pedrosa, who is using the new RC213V, Stoner decided to take the RC213V engine and put it inside the old chassis. While Stoner was 0.4 seconds behind Pedrosa, he is the defending champion at Laguna Seca.