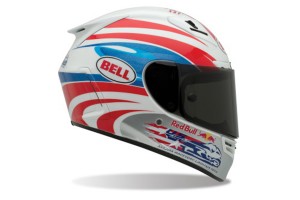 Bell Helmets is offering a special version of its Star Carbon complete with U.S. GP livery to be awarded to the top scorer in the company's interactive road racing simulator.[/caption]

Bell Helmets has announced it will be bringing its "interactive experience" to this weekend's U.S. Grand Prix at Laguna Seca, giving fans the chance to win one of the company's famous motorcycle helmets.

Bell is offering a special version of its [mageProductLink sku="650-2028473" title="Bell Helmets Star Carbon Full Face Helmet"]Star Carbon[/mageProductLink] complete with U.S. GP livery. The red, white and blue helmet will be awarded to the top scorer in the company's interactive road racing simulator, which is somewhat like a video game that gives fans the chance to see what it's like to be on a MotoGP bike.

The custom Star Carbon is reserved for the top winner each day, but those who don't earn the high score can still win Bell motorcycle apparel and sport bike helmets. In addition, all fans who visit the booth will get their picture taken with the Bell Victory Lane Girls.

"No other motorsports event offers more excitement and action for fans than MotoGP, and we're excited to do our part this year to give fans something extra," said Bell Brand Manager Brian Horton. "For road racing and sport bike enthusiasts, our Star Carbon is where it's at, and giving them the chance to win a Red Bull MotoGP version is completely over the top."