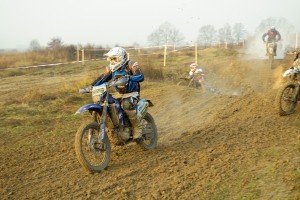 and Jeffrey Herlings were dominant in their recent World Motocross performances, with each rider going 1-1 in their respective class, reports Cycle News.

In MX1, Cairoli kicked things off with a wire-to-wire victory in the first moto, where he was never really challenged. In the second race, he had to work a little bit harder. Cairoli fell several laps into the race and ultimately had to weave his way through the pack to get out in front. He eventually passed Clement Desalle for the victory.

With the dominant win, Cairoli has recovered his lead after back-to-back DNF's several weeks ago. He now leads Desalle by 20 points in the overall standings.

Meanwhile, Herlings put in a similar performance in MX2. The Dutch KTM rider has always been good on sandy tracks, and the Russian course was no different. Herlings won both motos by more than 30 seconds each, leaving Tommy Searle and Jeremy van Horebeek to battle for second place, with Searle ultimately prevailing.

After the race, Herlings was reportedly involved in a car accident where he suffered a mild concussion and cracked rib. The motocross competitor is expected to be healthy for the next round.