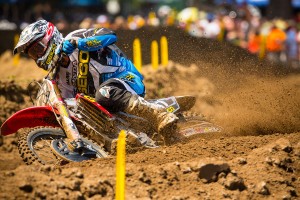 Eli Tomac recovered from a third-place finish in the first moto to win the Spring Creek MX in Millville, Minnesota, with a 3-1 finish - Photo: Frank Hoppen[/caption]

Eli Tomac recovered from a third-place finish in the first moto to win the Spring Creek MX in Millville, Minnesota, with a 3-1 finish.

The 250cc class has been competitive all year, and that was on display in the first moto. For much of the race, the front was controlled by Tomac and his GEICO Powersports Honda teammate Justin Barcia. Meanwhile, points leader Blake Baggett began all the way back in eighth place.

Eventually, however, Baggett was able to work his way to the front and pass both Honda riders. Barcia maintained second place while Tomac dropped back to third.

Baggett was on track to win again in the second moto after he passed Tomac in the first five laps. However, Baggett lost the front end of his bike and crashed out of the lead, allowing Tomac and Barcia to slip past. Tomac ultimately went on to win the race, which combined with his earlier third-place finish to give him the most points for the weekend. Baggett got back on his bike and ultimately finished fourth, right behind KTM's Ken Roczen.

With seven races in the books, Baggett is still on top of the leaderboards, although Barcia and Tomac are only 18 and 34 points behind, respectively.