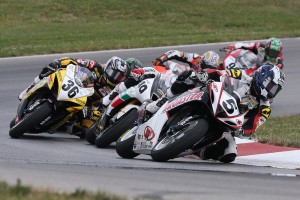 Dane Westby won the first race of the weekend - at the same venue where he notched his very first win - Photo: Brian J Nelson[/caption]

Dane Westby appears to really enjoy the Mid-Ohio Sports Car Course, as the Daytona Sportbike rider won the first race of the weekend at the track - the same venue where he notched his very first win.

Last year, Westby won the Saturday race at the track and hasn't won since then. This year, he repeated the feat by besting points leader Martin Cardenas on the final lap of action. When Cardenas went wide on a turn, Westby was able to slip by and hold Cardenas off at the end in a thrilling finale.

"It was a great battle," said Cardenas after the race. "I tried to close all the doors but Dane was very strong."

Westby was very strong in the second race as well, which was run in two parts due to inclement weather. After the first six laps, Cameron Beaubier was in front when officials called the riders in due to rain. The race then continued with sixteen more laps, but Beaubier was able to hang on to his margin. Westby settled for second place and still got the overall win for the weekend.

In the overall standings, Cardenas is up by 40 points, with Westby now in second place.