Blake Baggett Steps Up To 450cc For Million-Dollar Debut 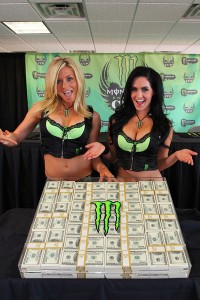 Current AMA Motocross 250cc competitor Blake Baggett will be making the step up to a bigger dirt bike in the most stylistic way possible - by racing for $1 million.

In his first official race on a 450cc bike, Baggett will be competing against seasoned pros such as Ryan Dungey as he goes for $1 million at the Monster Energy Cup in Las Vegas.

The annual motocross race features the very best riders from around the country competing in several different events. If a rider wins all the events, they walk away with the million. Last year, Ryan Villopoto became the first rider to accomplish the task.

"A million dollars up for grabs - that is probably the coolest thing I have ever heard of, and to be a part of that would be a cool thing," Baggett told Cycle News. "I don't have much time on a 450cc, but when the time comes, we'll put a little bit of time into it."

The 20-year-old rider is the current points leader in the 250cc class and will make the official, permanent jump to 450cc bikes next year.