Andrea Dovizioso Having Strong Season, Ready To Move Up 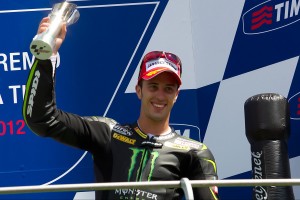 Andrea Dovizioso's third-place finish at Mugello gave him a Tech 3 record fourth podium of the year.[/caption]

Much of the news in MotoGP is focused on the leaders at the top of the standings, but Andrea Dovizioso of the Tech 3 Yamaha team has quietly been having a fantastic season, despite not having a factory bike to work with.

In fact, this is the best season for the Tech 3 team in the history of MotoGP, reports Crash.net. Dovizioso's third-place finish at Mugello gave him a Tech 3 record fourth podium of the year and also moved him up to fourth in the overall standings. Despite not having a podium finish, his teammate Cal Crutchlow has been consistent and is fifth overall.

Fifth place is the best a Tech 3 rider has ever finished, with Shinya Nakano completing the feat in 2000, the team's first year of MotoGP competition. Most years, the team is outside the top 10, so to have two riders in the top five is something special.

The success of the team has caused Dovizioso to set his sights on something higher. With Ben Spies' contract with the factory Yamaha team not expected to be renewed, it's believed Yamaha will bring Dovizioso or Crutchlow aboard the top-tier outfit. Both riders have expressed interest in doing so, but Dovizioso may be more forceful about it. According to Bettor.com, the Italian recently said he'd consider moving to World Superbike if he's not on a factory team next year.