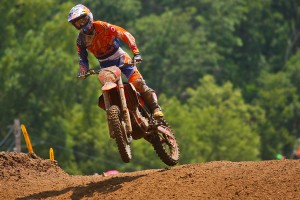 Ryan Dungey once again dominated the competition on his way to the championship - Photo: Frank Hoppen[/caption]

In what's beginning to become a very uneventful season of AMA Motocross, Ryan Dungey once again dominated the competition on his way to the championship, winning his 5th consecutive event and 10th consecutive moto.

The KTM rider was in fine form in front of his hometown crowd in Millville, Minnesota, but got off to a bit of a rocky start in the first moto. Dungey was in fifth at the end of the first lap, but passed three riders by lap three to settle in behind the leader, Mike Alessi, who had built up a considerable lead.

By Lap 6, that lead was completely gone as Dungey passed by Alessi and cruised to victory.

The second moto of the day was even more dominant for Dungey. The KTM rider grabbed the holeshot and never looked back, leaving the entire field in his dust. By the end of the race, Dungey was more than 49 seconds ahead of the second-place rider, Alessi.

While Dungey does not have the title locked up yet from a mathematical standpoint, it appears no rider really has a chance of catching the KTM competitor at this point, leaving the remainder of the motocross season a mere formality.