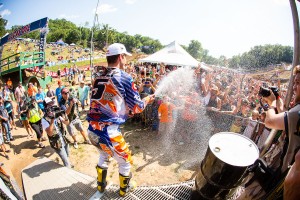 Red Bull/KTM Factory rider Ryan Dungey swept both motos of the 450 Motocross class at the seventh round of the Lucas Oil Pro Motocross Series at his hometown track, Spring Creek Motocross Park.

Dungey turned the fastest qualifying time in the morning practice sessions to please the local fans. When the gate dropped for moto one, Dungey had a great jump off the line but got pushed wide in the first corner and dropped to 8th. He quickly made a few passes in the opening lap and was sitting in 4th position by the start of the second lap. He moved into the top three on the third lap he when passed Kyle Regal over a table top before the sand whoops. A few laps later he caught and passed both Jake Weimer and Mike Alessi to take over the lead. He led the remainder of the laps to win the race by 23 seconds.

"It feels great to get a win here in front of my friends and family," stated Dungey. "This was a track I raced on growing up and it is still one of my favorites on the circuit."

Dungey put together a perfect race in the second 450 Motocross moto. He pulled the holeshot and never looked back. He led every lap of the race to take the win by 48 seconds. His 1-1 results earned him his fifth overall win of the season and improved his lead in the championship to 80 points. 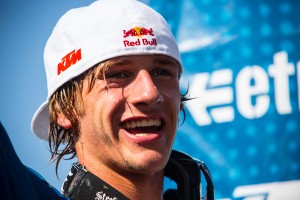 Although this was Roczen's first time racing at Spring Creek MX Park, you would not have known after watching him in the morning qualifying sessions where he turned the fastest qualifying time at the end of both sessions.

In the first moto, Roczen got off to a great start and was sitting in 2nd position around the first corner. Musquin was slightly farther back sitting in 7th on the first lap. A mistake by Musquin set him back to 13th at the end of lap two and he spent the remainder of the moto regaining those positions. At the end of the sixteen lap race he was able to come through the pack to finish 7th. Meanwhile, Roczen held on to 2nd place for the first half of the race before dropping to 4th on the eleventh lap. He was able to stay close to the top three but was unable to gain back the positions lost. 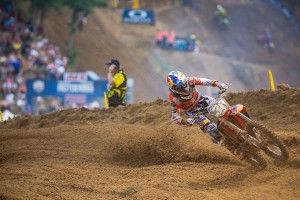 The Red Bull/KTM teammates didn't have the best start in the second moto. Roczen was able to salvage a 6th place start after the first corner while Musquin was back in 15th. Both riders used the 30 minute plus two lap moto to their advantage and were able to successfully climb through the pack. Roczen was able to move into podium position by the halfway mark and maintained that place to the checkered flag to earn 3rd overall. Musquin traveled from a 15th place start all the way up to 6th by the end of the moto to earn 7th overall for the day.

"I was happy to land on the podium in the second moto," stated Roczen. "However, I really wanted to be on the overall podium and just missed it by one spot. I am looking forward to the next round at Washougal. It is another track I have never ridden but have heard a lot about. Hopefully I can get back on the podium there." 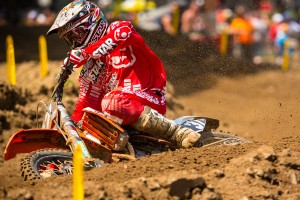 Stewart started off the morning in decent qualifying position after turning the 11th fastest time in combined qualifying. He garnered a mid-pack start after the gate drop of moto one to come around the first lap in 12th position. Arm pump in the middle of the race caused him to lose one position and prevented him from making any forward momentum through the pack. He eventually moved back into 12th on the final lap to finish the race in that position.

He had a similar start to the second moto and was in 13th place as he crossed the finish line jump on the first lap. He quickly charged through the pack and was sitting in 8th place by the fifth lap. He held that position for the next two laps before he stalled his bike and dropped back quite a few positions. He eventually finished the moto in 14th place. Stewart's 12-14 finishes earned him 14th overall for the day.

WMX Inactive for this Event