James Stewart To Sit Out Again 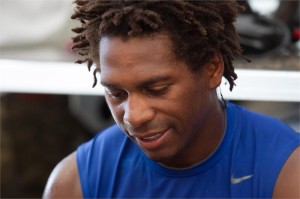 Just a week after returning from injury at Red Bud, Yoshimura Suzuki's James Stewart will be on the sidelines once again.

After Stewart finished in third place at the latest AMA event, the team made the decision to let the motorsports rider sit out a bit longer. With Ryan Dungey well out in front and Stewart having almost no hope of catching him, the team doesn't want to risk aggravating the hand injury with needless riding.

Thus, Stewart will miss the next two rounds of AMA Motocross action, with an aim of returning in time for the Southwick GP in Massachusetts.

"At this point in time it doesn't make sense to push it," said the team's manager Mike Webb. "From a safety standpoint, for both James and the other riders, we just don't want to take the chance. The injury is a little more than we thought and will simply require a bit more rehab. The plan is to stay off the bike for a couple weeks and then ride and test and come back strong for Southwick."

Suzuki will not have a rider for the upcoming race due to Brett Metcalfe also being out with an injury. The team has not announced if they will field a replacement.