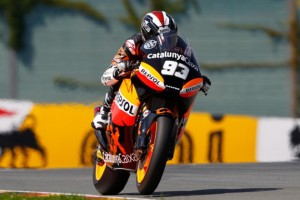 Marc Marquez currently leads the Moto2 series by a whopping 43 points, making a move to the top tier of sport bike racing inevitable.[/caption]

Honda has its team in place for the next two years of MotoGP, as the Repsol outfit has put pen to paper with motorsports superstars Dani Pedrosa and Marc Marquez.

Following Casey Stoner's shocking retirement announcement, the Honda team was left scrambling to find new riders for the 2013 season. The team believes it has found its replacement in up-and-coming rider Marc Marquez.

Marquez, just 20 years old, won the 125cc championship in 2010 and has since moved up to Moto2. Despite being hampered by an eye injury that caused him to miss a portion of the season thus far, Marquez currently leads the series by a whopping 43 points, making a move to the top tier of sport bike racing inevitable. The elimination of MotoGP's "rookie rule" means the rider will be able to move to the factory team immediately.

"To reach MotoGP next season with Repsol Honda is a dream come true and I want to thank HRC for their confidence in me," Marquez said in a press release. "I am very proud to be a part of the big Honda family for the future and I don't want to forget all the people who have helped me since I began to ride motorbikes."