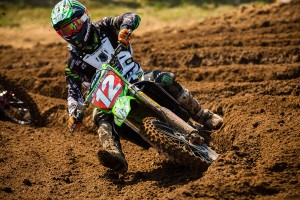 As he has done all season, Blake Baggett had to come from behind to get the win - Photo: Frank Hoppen[/caption]

Blake Baggett extended his lead in the 250cc AMA Motocross standings with back-to-back first-place finishes at Red Bud, as Justin Barcia looked on from second place.

As he has done all season, Baggett had to come from behind to get the win. In the first race, Baggett worked his way through the field of riders before eventually passing Barcia on Lap 12 and riding on for the win.

Baggett had a somewhat tougher time in the second race. Barcia grabbed the lead early on, but Baggett looked strong as he got in front on Lap 2. However, a mistake caused Baggett to crash and Barcia slipped back into the lead. The Kawasaki rider was not down and out, however. He picked up his bike and ultimately beat Barcia by a whopping 19 seconds to get the victory.

With the wins, Baggett stayed on top of the points standings at 272, just ahead of Barcia at 253. Eli Tomac finished third at Red Bud and accordingly moved up to third in the overall standings with 236, putting him one point ahead of KTM's Ken Roczen.