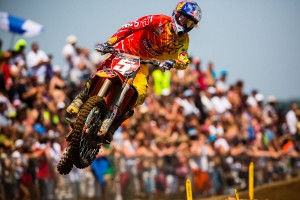 With a 70-point lead, it's doubtful anyone will catch Ryan Dungey this season, barring a major mishap - Photo: Frank Hoppen[/caption]

Ryan Dungey is running away with the AMA Motocross Championship this year, and that trend continued at the recent event at Red Bud USA.

Suzuki's James Stewart returned to action this week after being injured several weeks ago. Stewart started the season in control of the point standings, but Dungey has dominated while he's been injured.

Stewart got off to a good start and challenged Dungey early on, nipping at his heels in second place. Unfortunately, the rider crashed and later stalled his bike, ultimately falling back to sixth place. In the second race, Stewart had a better showing, finishing third, but Dungey won again by more than 35 seconds.

"Having James [Stewart] back this week was good to add another challenge, and it's good for the sport," said Dungey. "We made some more changes to the bike coming into [today] and I think we've made even more progress. My starts were good and I knew getting out front would make life easier, having a whole track to work with."