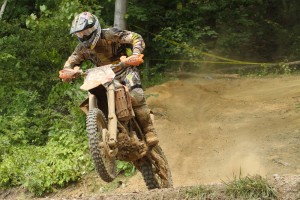 Factory FMF/KTM rider Kailub Russell earned 2nd overall in the GNCC XC1 class at round nine of the GNCC Series.

Russell got off to a decent start and was sitting in 2nd position at the end of the first lap. Fellow KTM rider Rory Mead got around him on the next lap to take over the position. The two KTM riders battled for the remainder of the race.

On the final lap, Russell was able to pass Mead at the end of the moto section to regain the runner-up spot. The two riders pushed each other to the end of the race and finished 2nd and 3rd respectively.

"I had a good battle with Rory today," stated Russell. "It was hot today and the course was challenging but we were able to remain consistent with our times and land on the podium. I have a few things to work on before the next event but I am determined to get back on the top step of the podium again."