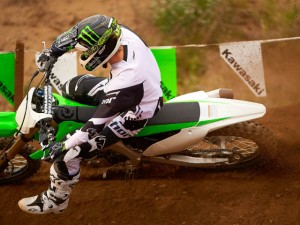 The new 2013 Kawasaki KX450F is being touted as one of the most powerful new bikes available, and with a few changes from last year's model and some new parts it's easy to see why. The dirt bike features push-button activated Launch Control Mode for better control over ignition timing in first and second gears. It also has pre-programmed ECU mapping that can be altered for standard, soft or hard terrain without having to bring along a programming computer when you head to the track.

The bike has a 449cc liquid-cooled, DOHC four-stroke engine with a balanced crankshaft similar to the one on Ryan Villopoto's factory bike. It is lightweight and designed to offer the most mid-range power possible with a new piston and angled fuel injectors. The brakes are lighter than those on past models, and new front brake pads are designed to have more friction for better stopping power.

While I really prefer Yamaha and Honda bikes, this Kawasaki caught my eye because it's loaded with new features, including Kayaba air forks. Instead of traditional spring forks, the KX450F will have a set of Kayaba Pneumatic Spring Forks, which use pressurized air chambers in place of springs for improved bottoming resistance.

The spring rate of the forks is easily adjustable by using a special adapter to alter the air pressure inside the chambers, which gives you access to a wide range of settings for increased performance on the track. It is also about 1.6 pounds lighter than traditional spring forks and reduces friction by 20 percent, so you get a smoother ride and better maneuverability. 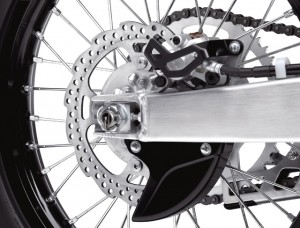 The front and rear brake discs are matching on the new model, which gives the bike an overall togetherness that last year's model lacked.[/caption]

As far as looks, the 2013 KX450F has a new front fender, updated decals and silver engine covers instead of last year's black that make the bike a bit more eye-catching on the track. The front and rear brake discs are matching on the new model, which gives the bike an overall togetherness that last year's model lacked. The footpegs and handlebars have been recycled from last year's model, so if you disliked those, you may need to look into aftermarket dirt bike parts and accessories to upgrade the styling of the hand and footholds.

Overall, the 2013 Kawasaki KX450F is an impressive new ride any dirt biker lover would enjoy taking out on the track. It's perfect for any terrain, making it ideal for riders who like to mix things up.