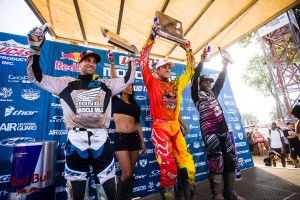 Red Bull/KTM Factory rider Ryan Dungey claimed his fourth straight victory and eighth moto win of the season when he earned another pair of 1-1 finishes in the 450 Motocross class at the sixth round of the Lucas Oil Pro Motocross Championship Series held at Red Bud MX Park.

Dungey qualified fastest in the morning practice sessions and proved that he was the man to beat when he won both motos in brutal 100 degree temperatures at Red Bud MX Park.

Dungey made it look easy in moto one after earning the holeshot and pulling off to an early lead. He went on to lead every lap of the race, collecting his seventh moto win of the season by a 45 second margin of victory.

"It feels good to get another win here at Red Bud," remarked Dungey after the first moto win. "I am really happy with my bike set-up today. The conditions are tough and I know it's only going to be hotter and rougher for the second moto. I want to give a shout out to all the fans that are here today. They are amazing lining the fence and cheering us on in this heat." 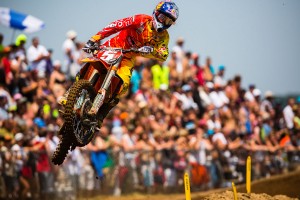 KTM's history-making rider earned another great start when the gate dropped for the second moto. This time he sat in 3rd position around the first corner. Through some creative lines, Dungey was able to make a pass on Christian Craig for 2nd place on the second lap of the race. Dungey then set his sights on the lead ride of Mike Alessi. On the third lap he was able to move around Alessi and he never looked back. Dungey took his eighth moto win at the end of sixteen laps with a 34 second lead over the 2nd place ride.

Dungey's victory at Red Bud strengthened his lead in the championship points and allows him to continue to carry the red plate to round seven of the Lucas Oil Pro Motocross Championship Series held in his home state of Minnesota on July 14, 2012. 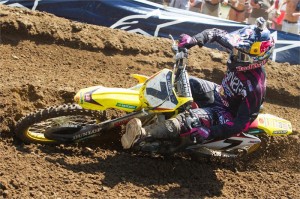 Team Yoshimura Suzuki Racing's James Stewart returned from injury at the popular Red Bud AMA Pro Motocross Championship sixth round in Buchanan on Saturday, overcoming stifling humidity and temperatures over 100 degrees to finish third overall and once again putting his Yoshimura Suzuki RM-Z450 on the podium.

After two weeks of rest and rehabilitation away from the bike, Stewart took a conservative approach to rough-and-tumble Red Bud. Turning in solid laps in practice, he qualified second and got a good gate pick. In the first 30-minute moto, Stewart got a good start and was running second when he suffered a few mishaps, but recovered to finish sixth. In the second moto, he slotted into third place long before the race's halfway point and turned consistent laps for the remainder of the moto. The sixth- and third-place finishes gave Stewart third overall for the day.

Said Stewart: "It was an eventful day. I was second fastest in practice, but in the first moto, I realized I wasn't quite 100 per cent, but I still wanted to try and have a decent moto. After one crash and a stall, I ended up sixth. In the second moto, I came from 10th and made my way up into third and just sat there. But it was good to be racing again, the Yoshimura Suzuki team was working hard and the Yoshimura Suzuki RM-Z450 was running great. The fans at Red Bud are awesome and I was happy just to be back racing. Now I'm looking forward to Millville next weekend." 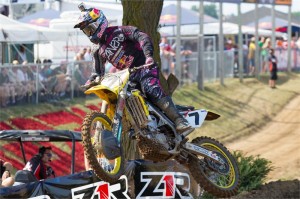 "It was good to be racing again" - James Stewart[/caption]

Team mate Brett Metcalfe, who'd moved into the top five in the overall championship points standings after the last round at Budds Creek, suffered a broken tibia and fibula in a recent practice crash. Although Metcalfe is on the mend, he'll most likely be out for the rest of the season.

Team Yoshimura Suzuki Racing's next event is the seventh round of the 2012 AMA Pro Motocross Championship on July 14th at the Spring Creek National in Millville. 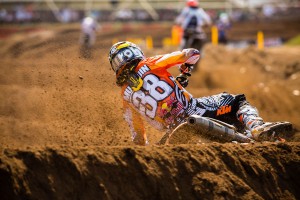 Musquin was on the gas as the gate dropped for moto one, where he claimed the holeshot as the riders rounded the first corner. He held on to the lead for the first two laps before losing a position to Justin Barcia. Meanwhile, his Red Bull/KTM teammate was not far behind in 4th place at the end of the second lap.

The Red Bull/KTM teammates battled inside the top five for the duration of the moto. When the checkered flag flew, it was Roczen who would get the best of his teammate and finish in 3rd while Musquin settled into 4th.

The tables turned in the second moto. Musquin again got off to a great start and rounded the first turn in 3rd position. He fought around the position the entire moto eventually only dropping one spot to finish 4th. His 4-4 finishes earned him 4th place for the day. 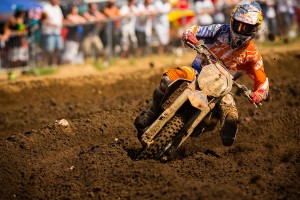 This race was the first race that Ken Roczen has not been on the podium this season - Photo: Hoppenworld.com[/caption]

"I am very happy to get 4th today," reported Musquin. "I am getting closer to a podium spot each week. I had some great starts today and I just need to work on my speed at the end of the moto in order to compete for a podium spot."

Roczen had a non-typical bad start and was around 10th place at the start of the second moto. He moved into 9th place on the second lap and then spent the remainder of the moto charging forward in position on his way to the top five. Although he reeled in the 5th place ride of Wil Hahn he was unable to make the pass and finished 6th overall. This race was the first race that Roczen has not been on the podium this season.

"I am bummed to not finish on the podium," remarked Roczen. "This race was challenging today. It was hot and humid and in the second moto it got really rough and was hard to make passes. I am glad to still finish in the top five and I know where I can make improvements. I am looking forward to the next few rounds." 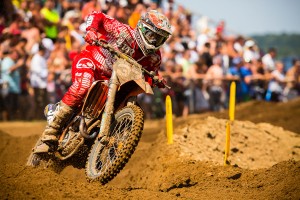 The KTM rider got off to an 8th place start in the beginning of moto one before an early moto crash sent him to the back of the pack. Stewart charged from 37th place to 26th position before he suffered another crash on the sixth lap of the moto which caused him to pull out of the race.

"Unfortunately, there was too much damage to my bike after the second crash so I had to pull off and get it fixed for the second moto," remarked Stewart after moto one.

Stewart had a mid-pack start when the gate dropped for moto two and was sitting in 15th position after the first lap. He rode a solid pace and was able to move up four positions before the moto end to finish 11th. His combined moto finishes earned him 14th overall for the day. 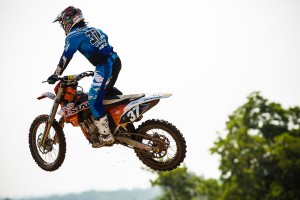 "It wasn't the day we hoped for," reported Stewart. "I am happy to finish close to the top ten in the second moto but I need to get two consistent moto finishes. That is our goal heading to the next rounds."

Stewart's teammate, Matt Moss, was missing in action from the Red Bud event. JDR/J-Star/KTM Team Manager Nathan Ramsey stated, "Moss was feeling very sick over the two week break and we decided it was best that he stay home until he is recovered. We are hoping to see him return at the Washougal event."