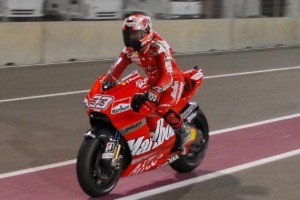 and Max Biaggi dueled over two races at Motorland Aragon, and the end result was Melandri coming out on top.

In the first race, Melandri and Biaggi were clearly the two best riders. The Italians swapped first and second place several times, but in the end Melandri didn't have enough speed to catch up with Biaggi. The World Superbike points leader added to his total with the win, while Melandri had to settle for second.

Melandri told Crash.net he was "disappointed" after race one, but he made up for it in the second moto. In this race, there were more riders out front to deal with. Melandri was the sole BMW among Aprilias piloted by Biaggi, Eugene Laverty and Chaz Davies. In the end, Melandri was able to get past Laverty and claim victory, while Biaggi fell back to fourth.

The 2-1 finish meant that Melandri had the best weekend of all riders, and allowed him to gain slightly on Biaggi's big points lead in the overall standings. With Honda's Jonathan Rea finishing outside the points in race one, Melandri slipped into second place overall, 48 points behind Biaggi in first.