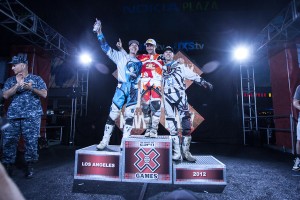 The third round of the 2012 GEICO AMA EnduroCross Championship, presented by Lucas Oil had the honor of being part of X Games for the second consecutive year and FMF KTM's Mike Brown took the Gold ahead of Beta's Cody Webb and Husqvarna's Cory Graffunder. The Staples Center, home of the 2012 Stanley Cup Champion LA Kings as well as the Lakers and Clippers was packed and the crowd was treated to an excellent show as thirty riders representing twelve different nations battled for the ten spots in the Men's main event.

For the Women, the field consisted of ten riders representing four nations and Maria Forsberg repeated as the gold medal winner but she was seriously challenged by Louise Forsley, the top American female trials rider and Canadian, Chantelle Bykerk used consistency to finish third.

Brown showed that he was going to be a threat by setting the fast time during the hot laps, which put the riders on the track by themselves for a single lap against the clock. Lucas Oil/Rockstar backed Colton Haaker was second fastest followed by Monster Kawasaki's Taylor Robert, Great Britain's Graham Jarvis and GEICO Honda's Geoff Aaron. Taddy Blazusiak, the points leader and three time EnduroCross Champion fell in a rock turn and finished 25th among the 30 riders. 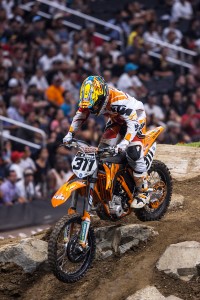 Mike Brown showed that he was going to be a threat by setting the fast time during the hot laps - Photo: Drew Ruiz[/caption]

The Heat races proved to be extremely exciting as Brown crashed out of the lead and handed the win to Blazusiak in heat one. Heat two was won by Webb battled his way around Aaron. Robert easily won the third heat race but the battle for second was exciting as eighteen year old Steward Baylor, the current National Enduro point's leader, led for a few laps and appeared to have the speed to hold onto second but he got stuck on the rock hill on the final lap and gave up the position to Husqvarna's Kyle Redmond.

Two riders each would qualify from two LCQ's. Kevin Rookstool came out on top of a multi rider battle in the first LCQ and Destry Abbot took the other qualifying position. Graffunder and Jarvis took the final two spots in the main.

Haaker, the Las Vegas EnduroCross winner and second in the point standings coming into X Games failed to qualify after several mistakes during both the heat and LCQ. Italy's Alex Salvini, Kendall Norman, Bobby Garrison, Bobby Prochnau, and Gary Sutherlin were among the other top riders that did not qualify for the ten rider main event.

Brown rocketed to the front at the start of the main event and although he led every lap, the tough track meant that no lead was safe as he proved when he got stuck on the rock uphill on the final lap, allowing Webb to close to within striking distance. Webb had a top five start and worked his way past Graffunder and Abbott to get into silver medal position. Graffunder was challenged by Blazusiak, who had worked his way through the field after a last place start but managed to hang onto the bronze. Blazusiak finished fourth ahead of Robert, who was battling with him for that position when he went over the bars hard. Robert remounted with his helmet visor busted off and salvaged fifth. Jarvis, the world's top Extreme Enduro competitor over the past few years is used to events that last for hours or days but proved he has the skills necessary for the tight, intense indoor racing as well by finishing a respectable sixth. Abbott held on for seventh ahead of Aaron, Redmond and Rookstool. This was Brown's first ever EnduroCross win and it was on the series largest stage. 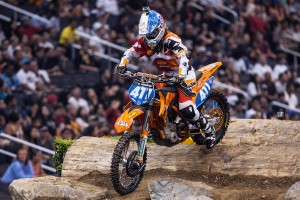 Maria Forsberg won the gold in an amazing race with the crowd loudly cheering for the women throughout - Photo: Drew Ruiz[/caption]

The ten women riders proved that the level of competition has improved dramatically over the past year as they all navigated the track extremely well and put on an amazing race for the podium positions. Lucas Oil, Troy Lee Honda's Tara Geiger, a top WMA Motocross racer, former Women's Moto X Gold medalist and last year's Enduro X silver medalist set the fastest time during practice and she battled for the lead with Maria Forsberg and Louise Forsley for several laps. Forsley appeared to be on her way to the win before a few mistakes allowed Forsberg to take the lead but they were never far apart. Canada's Chantelle Bykerk proved that consistency is also critical as she worked her way into the final podium position after Geiger had several costly mistakes. The crowd was loudly cheering for the women throughout.

The GEICO EnduroCross series will have a summer break before resuming at the Citizens Business Bank Arena in Ontario, California on Saturday, September 15th. For more information, go to www.EnduroCross.com.

The remaining rounds of the 2012 GEICO EnduroCross series will air on the Lucas Motorsports hour on the NBC Sports Network, check your local listings or www.motorsportshour.com.

EnduroCross tracks incorporate various elements of extreme off road racing into a Supercross-style setting, including rocks, boulders, logs, sand, mud, a water-hole...and even a few special obstacles like giant tires thrown in! Known as the "toughest racing on two wheels," this indoor off road racing will certainly keep you on your feet. For the seven EnduroCross events, be sure to log-on to www.motorsportshour.com for local air dates/times for the Lucas Motorsports Hour on the Versus network.