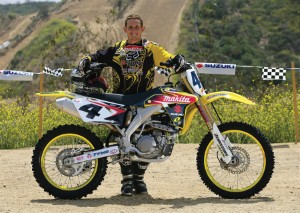 Most motorsports fans consider Ricky Carmichael to be the greatest motorcycle rider of all time, which helps explain his nickname, "The GOAT" (Greatest Of All Time). Carmichael has only been retired for a few years, but he left such an impact on motocross that most consider him a living legend. Now, youngsters have the chance to learn from the best.

They were joined by Jamie Dobb, Britain's last MX world champ, and Tommy Searle, who currently competes in MX2 GP. Together, the riders taught kids about technique and race tactics.

"We wanted to build something that no one else has done and something for the parents as much as the riders," Carmichael told the news source. "For me it is more about giving back to the sport. We put a lot of pride, effort and time into it. The fans here are definitely 100 percent behind their guy, whether he's a fifth-place guy or going for the win, and I respect that. They are very loyal here in Europe and that's what I've always liked about it."