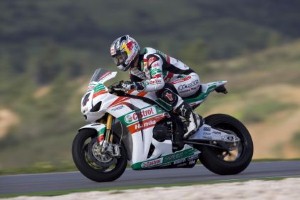 may only be fourth in the overall standings, but all eyes will be on him this weekend as World Superbike visits Aragon. The Italian rider was the fastest around the track during Friday qualifying, besting countryman and points leader Max Biaggi's time to take the pole.

As the qualifying began, it appeared Biaggi would continue his winning ways by taking the pole position. The Aprilia rider led most of the morning before suffering a crash later in the session. That allowed Melandri to improve on his time and win the pole at 1:58.608, approximately 0.4 seconds better than Biaggi.

Qualifying was disastrous for British rider Jonathan Rea of Honda, who is the closest to Biaggi in the point standings, although he's still nearly 40 points behind. Rea had trouble with his bike all day and couldn't seem to muster a good run. Ultimately, Rea finished 14th, meaning he'll have some catching up to do if he wants to get up front with Biaggi and Melandri when the race begins this weekend. The British competitor is already considered to be at a disadvantage this weekend because he only recently rode the Aragon track for the first time.