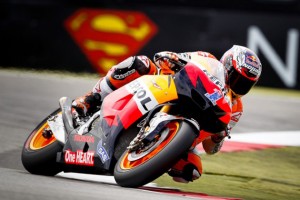 With just over a minute to go in qualifying, Casey Stoner turned in a time of 1:33.713 on his penultimate lap, enough to push him into the pole position in the race.[/caption]

After fighting issues with his bike all throughout testing, Australian Honda rider Casey Stoner surprised the motorsports world by winning the pole position during qualifying for the upcoming Dutch MotoGP in Assen.

The Australian rider struggled during testing yesterday and said it felt like the bike was trying to throw him off. During Friday's morning testing, it succeeded. Stoner was thrown from the bike and suffered what he later described as "one of the biggest in my career and certainly one of the most painful," according to Crash.net.

Many weren't even sure if Stoner would return to the track for qualifying later in the day, but he got back on the bike and competed. Motorcycle tires have been the talk of Assen, as riders try to figure out whether they'll end up going with a hard or soft tire in the race. Stoner didn't trouble any of the leaders until he put on his soft tire, at which point he blew past the competition.

With just over a minute to go in qualifying, Stoner turned in a time of 1:33.713 on his penultimate lap. That was enough to push him past his teammate, Dani Pedrosa, for the pole position in the race. Points leader Jorge Lorenzo will start third.

"It was certainly a lap that surprised us as much as everyone else. We didn't realize we had that much pace in us because we haven't been able to get the hard tire working. So the pace is there [on the soft tire], we just need to make sure we can last the race."