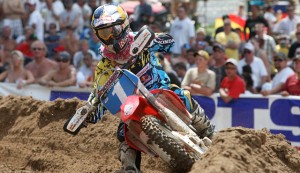 Ashley Fiolek will once again have to watch from the sidelines at the X Games, as the she has been ruled out of the competition due to injury.[/caption]

Women's Motocross Association (WMA) rider Ashley Fiolek will once again have to watch from the sidelines at the X Games, as the female racer has been ruled out of the competition due to injury.

Fiolek, the first deaf motocross rider in history, suffered a concussion during a motocross event on June 2. After consulting with doctors, she decided to pull out of the competition because she has not fully recovered.

"It is with great sadness that I must withdraw from the 2012 ESPN X Games," Fiolek said in a release. "I am absolutely heartbroken that I will miss this year, but I need to do what is right for my health and my future."

This is the second year in a row the 21-year-old rider will miss the X Games due to injury. Fiolek crashed in the early rounds of qualifying for the 2011 games, forcing her to miss the competition as well.

Fiolek has an impressive track record at the summer competition, especially considering her young age. Fiolek captured the gold medal in both the 2009 and 2010 competitions. She was also the WMA National Champion in 2008 and 2009.