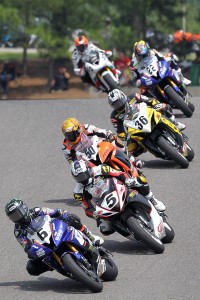 Cameron Beaubier was a force to be reckoned with at Barber, leaving the other riders in his dust - Photo: Brian J. Nelson[/caption]

Cameron Beaubier had a perfect weekend for Y.E.S. Yamaha at Barber Motorsports Park, winning the pole and both races for the weekend.

The 19-year-old Beaubier hasn't been much of a factor this season, as he was injured early and has only recently returned. Yet the rider was a force to be reckoned with at Barber, leaving the other riders in his dust.

"It feels awesome to get my first win and then back it up the next day," Beaubier told SpeedTV. "It was weird because my first lap wasn't very good at all...I tried to save my tires as much as I could, and towards the end I put my head down and pushed really hard to get away."

Suzuki's Dane Westby was the closest of the other riders, and ultimately took second place. Martin Cardenas, the overall points leader, was able to get on the podium in third.

Since Beaubier has been out with injury, his wins probably won't have much of an effect on the championship. Cardenas is still in the lead, while Westby and Jason DiSalvo are tied for second, approximately 50 points behind.