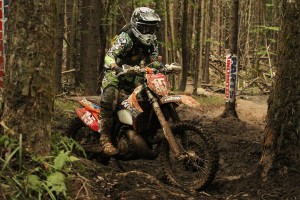 Rory Mead rode a solid pace throughout the entire race to take his second GNCC XC1 win of the season - Photo: Shan Moore[/caption]

KTM riders Rory Mead and Kailub Russell finished 1st and 2nd overall at the eighth round of the GNCC Series after a great last lap battle to the finish.

Factory FMF/KTM rider Kailub Russell had a great start and leaped out front early. Unfortunately, he suffered a crash on the first lap that set him back a few positions. His times were quick but a few lappers halted his speed throughout the three-hour race. On the final lap, he began to challenge Mead for the lead and came just six seconds short at the finish.

Mead rode a solid pace throughout the entire race to take his second GNCC XC1 win of the season. Now eight rounds into the series, Mead sits third in the overall point standings while Russell is just one point shy of the lead position. 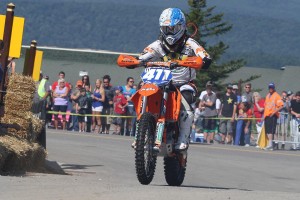 Maria Forsberg captured her eighth win of the season to remain undefeated in the Women's class - Photo: Shan Moore[/caption]

In the Women's Pro class, Factory FMF/KTM rider Maria Forsberg kept her win streak alive. She captured her eighth win of the season to remain undefeated in the Women's class. Forsberg now has a comfortable point lead heading to the ninth round. 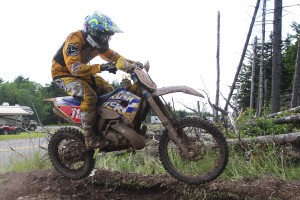 Husaberg Factory rider Nick Fahringer earned a top five finish at the Snow Shoe GNCC after coming through the pack after a first corner crash to finish 4th in the GNCC XC1 class.

Fahringer, fresh off a podium finish at the Inyan Kara National Enduro last weekend, started from the fifth row at the Snowshoe GNCC. He launched out front quickly, but high-sided on the pavement in the first corner and lost some ground. He was able to pass a few riders on the first lap to stay within the top ten and he moved into 6th overall after the second lap.

Fahringer continued to plug-away throughout the three-hour race and was able to move up two more positions to hold down 4th position. He turned up the gas on the final lap and gapped the 5th place rider by a total of 44 seconds.

"I love going to this event. It is different than the rest and really fun to ride. I made a few mistakes early on today but I felt like I finished strong. I am happy with a top five finish and hope to hit a few more GNCC events before the end of the year," remarked Fahringer.