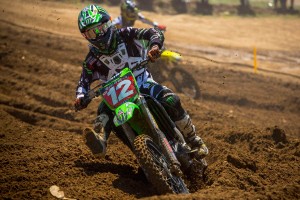 Blake Baggett scored his second 250cc win of the season and extended his points lead over the other competitors at Budds Creek - Photo: Frank Hoppen[/caption]

Blake Baggett scored his second 250cc win of the season and extended his points lead over the other competitors at Budds Creek. The Kawasaki rider finished second in the first moto, but won the second race to get the overall win.

In the first race, Ken Roczen jumped out to an early lead but was passed by both Baggett and Justin Barcia. The two riders dueled at the front, but it was ultimately Barcia who was able to hang on for the win.

Barcia's good fortune would not continue, as he fell out of the top five early on in race two. Once again, Roczen had the lead early on but couldn't hold off Baggett, who cruised to victory and earned the overall win for the weekend.

The victory allowed Baggett to build his lead in the standings to 13 points over Barcia.

"My main goal is to keep holding onto that red plate," Baggett told SpeedTV. "I don't think I'm hungrier than I was last year, I think I'm just smarter. Last year I got a lot of wins, but just kept making mistakes that cost me. So this year I've learned from my mistakes and know what I need to do to achieve my goals."