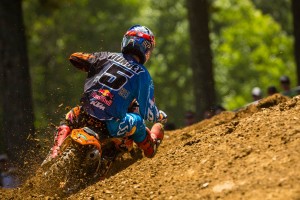 Dungey had perhaps one of the best performances of his career, dominating the rest of the field and winning both races by staggering margins - Photo: Frank Hoppen[/caption]

With James Stewart still on the shelf, Ryan Dungey cruised to his third straight victory in the AMA Motocross championship, finishing first in both motos to take the overall victory.

Dungey had perhaps one of the best performances of his career, dominating the rest of the field and winning both races by staggering margins. The rider jumped out to an early lead in both motos and eventually won by 43 and 33 seconds - an eternity in the world of motorsports. Broc Tickle finished second in both races.

"I always love coming to Budds Creek," Dungey told the news source. "It offers a lot of different challenges. I got decent starts and that helped. We got the bike set up really well. We found some things after a pretty challenging practice. Once I got in the lead things seemed to click. Even though I'm winning in what may seem like big margins, I'm not taking anything for granted. I'm hoping to keep this momentum going."

It would take a major injury to Dungey to keep the championship from him at this point. As big as the margin of victory was in the races, his lead in the overall standings is even larger. Dungey is up 58 points on second-place rider Mike Alessi. Jake Weimer is in third, just three points behind Alessi.