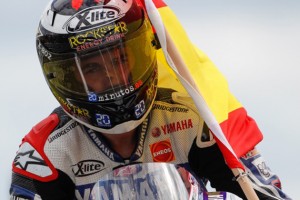 Jorge Lorenzo passed Casey Stoner on the 11th lap and never looked back, eventually winning by more than three seconds.[/caption]

Yamaha's Jorge Lorenzo considered his strong run in MotoGP to stretch his championship lead over challenger Casey Stoner at Silverstone. However, the victory was anything but easy.

Going into the race, most riders thought the British GP at Silverstone would be a challenge. Stoner had already complained about uneven paving on the track, and poor weather during testing led many to believe that plenty of crashes could soon follow.

Yet the weather was great when the race got underway, and the riders shot out of the gate quickly. American Ben Spies was in the lead early on as Lorenzo dropped back to fifth. The rider later told Crash.net he had trouble keeping pace with the first group in the early going.

As the race went on, however, Lorenzo asserted himself. After Stoner passed Spies for the lead, Lorenzo made his way through the field and was soon on the Australian rider's heels. Lorenzo passed Stoner on the 11th lap and never looked back, eventually winning by more than three seconds. Stoner held on to beat Dani Pedrosa for second place.

Lorenzo now leads Stoner by a full race, or 25 points, in the standings. The points gap is significant because it now means Lorenzo could hypothetically miss a race in which Stoner finishes first and still not surrender his lead in the overall standings.