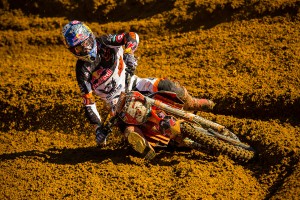 Ryan Dungey increased his win streak to three in a row - Photo: Hoppenworld.com[/caption]

Red Bull/KTM Factory rider Ryan Dungey increased his win streak to three in a row after winning both motos at the fifth round of the Lucas Oil Pro Motocross Championship Series held at Budds Creek MX Park.

Dungey earned the fastest qualifying time in the morning practice sessions, turning a lap time 2 seconds faster than the next closest competitor. Dungey carried that momentum into the first moto where he got off to a great start and an early lead. Dungey was able to lead every lap of the first moto to go on to take the win by 43 seconds.

"I felt very comfortable on this track and was able to pull away early and just focus on my own race," commented Dungey after the first moto.

In the second moto, Dungey garnered a 2nd place start behind Mike Alessi. He trailed Alessi for the first few laps before making a pass to take over the lead. Once out front, he was easily able to check out and take the second moto win. His 1-1 moto finishes earned him his third consecutive 450 Motocross class win for the season. 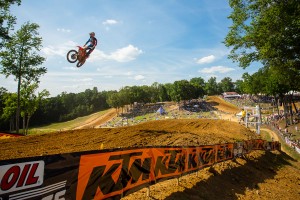 Now five rounds into the series, Dungey maintains the red number plate and a 54 point lead in the series point standings.


Brett Metcalfe Moves Up To Fifth At Budds Creek 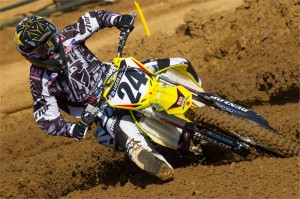 Team Yoshimura Suzuki Racing picked up another top-10 finish in the 2012 AMA Pro Motocross Championships at the Budds Creek National fifth round at Mechanicsville on Saturday.

Brett Metcalfe raced his Yoshimura Suzuki RM-Z450 to two respectable moto finishes to bring home sixth overall, which moved him up to fifth in the title chase.

Metcalfe overcame two lackluster starts by putting his head down and charging through the field: In the first moto, the Australian clicked off solid laps to get to eighth by the race's end. In moto two, he came out even stronger and slotted into eighth by the half-way point. He rode aggressively for the remainder of the moto, moved into seventh and eventually sixth for a combined moto result of sixth overall.

Said Metcalfe: "It was a tough track. In moto one, I had a bad start and I came from a long way back to get up to eighth. During the break, I worked with the Yoshimura Suzuki team and we made some changes for the second moto. I needed a good start but I didn't get it and I was back in 20-plus position. But I rode hard, the Yoshimura Suzuki RM-Z450 was brilliant; and I made good passes. Now, we have a break and I'm going to focus on my starts to be better at Red Bud. I want to really put the hammer down to get the results I want." 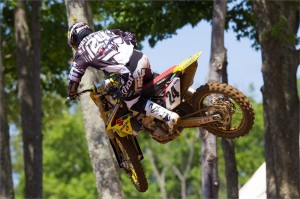 Brett Metcalfe moved up to fifth in the title chase.[/caption]

Yoshimura Suzuki team mate James Stewart continues to suffer from a wrist injury incurred in his recent crash at round three at Thunder Valley. Knowing the series was about to go into a two-week break before the next round, Stewart opted out of Budds Creek so he could focus on recovering and returning 100 per cent at RedBud.

"I was sorry to miss Budds Creek," said Stewart. "I'm getting better, but I'm still not where I need to be to be racing. I'm just looking forward to being completely healthy in a few weeks so I can come back and race the way I was racing at the start of the season."

Team Yoshimura Suzuki Racing's next event is the sixth round of the 2012 AMA Pro Motocross Championship on Saturday July 7th at the Red Bud National in Buchanan. 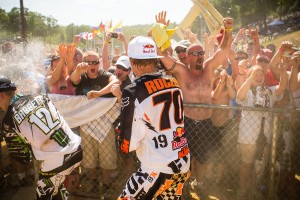 Roczen pulled the start he needed in the first moto by earning the holeshot around the first corner of the race. He went on to pull out to an early lead in the opening laps. Roczen was able to hold on to the lead through the first half of the race before Justin Barcia was able to move around for the lead. Roczen lost one more position on the next lap which dropped him to 3rd. He maintained his pace for the remainder of the laps to cross the finish in 3rd place. His teammate, Marvin Musquin, had a 5th place start and was able to make a pass into 4th. He finished the moto in 4th place in one of his most remarkable rides of the season.

In the second moto, Roczen leaped out front to pull the holeshot and take the early lead. Musquin also had an impressive start right behind his teammate in 2nd place position. Roczen pulled a large lead early in the moto while Musquin battled inside the top three. At one point Roczen had pulled over an 8 second lead on the rest of the pack. Unfortunately, some lappers hindered his progress near the end of the moto and allowed Blake Baggett to catch up. Baggett eventually made the pass for the lead, dropping Roczen to 2nd. Roczen went on to finish the moto in 2nd position. His 3-2 moto scores earned him his career best 250 Motocross class overall with a 2nd place result. Musquin hung on for a 4th place finish in moto two. His pair of 4th place finishes earned him 5th overall for the day. 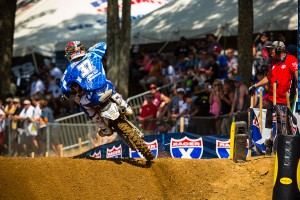 JDR/J-Star/KTM rider Malcolm Stewart earned 16th overall after bouncing back from a last place result in the first moto to an 11th place finish in the second moto in the 250 Motocross class at the fifth round of the Lucas Oil AMA Pro Motocross Championship held at Budds Creek MX Park.

Stewart and his teammate Matt Moss both had bad luck in the first moto. Moss was credited with 36th after a crash and Stewart, unfortunately, was placed in last position after crashing multiple times in the first moto.

Both riders regrouped and put together decent second motos. Stewart did suffer one crash after the first corner off the start but was able to quickly recover. He was determined to make up some time and he began passing riders immediately to quickly move into the top twenty. By the end of the race he had passed nearly three-quarters of the field to move up to 11th place by the moto end. His combined moto scores earned him 16th overall for the day. Stewart's teammate, Moss, also had a more impressive second moto and was able to finish 17th.

"Both of our riders struggled a little bit today with some crashes," commented JDR/J-Star/KTM Team Manager Nathan Ramsey. "However, we also saw some good speed from both of them and are confident that both riders will continue to improve this season and work toward claiming their career best finishes."