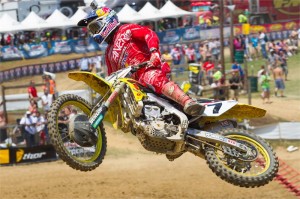 James Stewart suited up for the race last week and attempted to compete in the first moto, but withdrew from the second moto, saying it was too painful to continue.[/caption]

James Stewart has announced he will not be racing at Budds Creek this weekend in the AMA Motocross Championship as he continues to recover from the wrist injury he sustained two weeks ago.

After opening the season with two straight wins, Stewart surrendered the points lead in the series to KTM's Ryan Dungey and then went down to injury. In an effort to stay competitive and keep the gap between himself and Dungey to a minimum, Stewart suited up for the race last week and attempted to compete in the first moto. Unfortunately, he only managed fifth place in the first race. The Suzuki rider than withdrew from the second moto, saying it was too painful to continue.

Now, Stewart has taken to Twitter to reveal he is still not healed from the injury and will not be competing at Budds Creek - giving Dungey a chance to build on his already massive point lead.

"Sad to say but I won't be at Budds Creek this weekend," Stewart wrote on the social networking site. "Things are getting better but still not where I need to be to be racing this Sat."

After the race this week at Budds Creek, AMA Motocross takes a three week break before returning July 7 at Red Bud, where Stewart will likely be back in action.