Taddy Blazusiak Back On Track In Sacramento 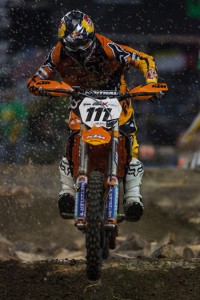 Taddy Blazusiak got back to his winning ways during the second round in Sacramento - Photo: Drew Ruiz[/caption]

Last season's GEICO AMA EnduroCross Championship was dominated by one rider - Taddy Blazusiak. In fact, the KTM competitor put together a winning streak through the end of the season that was expected to continue into the 2012 competition. However, at the EnduroCross season opener several weeks ago, Blazusiak's long streak came to an end when Colton Haaker took the victory in the first round.

Blazusiak got back to his winning ways during the second round in Sacramento, according to Fullnoise. The Endurocross rider easily won his heat race and qualified for the main event. Yet it was a bad start for the KTM rider, as he began the race in 8th.

Blazusiak wouldn't stay far back for long, however, eventually working his way up to third by the end of the first lap. After two laps of battling with Destry Abbott, Blazusiak made his move to get alongside leader Kevin Rookstool. The pass came on the fourth lap, and from there Blazusiak cruised to victory.

"I am very happy to win this race," Blazusiak told the news source. "I really liked the track and the racing was fun."

The KTM rider is now back on top of the overall point standings after Haaker finished a disappointing 10th. The third round of the EnduroCross Championship will take place in Los Angeles as part of the Summer X Games on July 1.