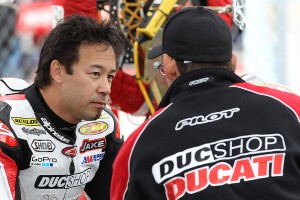 Ducshop Racing, which sponsors Jake Zemke in the AMA Pro SportBike Championship, is now turning to fans to help fund the rest of the schedule - Photo: Brian J. Nelson[/caption]

It's no secret that times are tough in motorsports, with many teams folding after being unable to secure funding for the season. Ducshop Racing, which sponsors Jake Zemke in the AMA Pro SportBike Championship, is now turning to fans to help fund the rest of the schedule.

Ducshop apparently spent much of its budget during the first four rounds of the season. An anonymous sponsor made it possible to race in the fifth round. From here on out, however, the team is hoping fans will be able to pick up the slack.

The team is soliciting donations online, offering rewards for certain donation amounts. The team has enough money to race in the sixth round of the series, but the remaining rounds are in doubt. Ducshop Racing already uses volunteers for its entire crew, but the costs of racing are still too high, forcing them to rely on donations.

Zemke is currently fifth overall in the championship with six races left to go, which is somewhat impressive for racing on a shoestring budget. The team hopes the donations will keep Zemke in contention without forcing him to sit out any races.