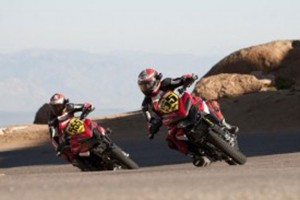 A prominent motorcycle parts company has joined the Spider Grips/Ducati team for the upcoming Pikes Peak International Hill Climb during the 90th annual Race to the Clouds on July 8. Akrapovic, a Slovenian manufacturer of motorcycle exhausts and carbon composites, will sponsor the team as they look to take home the title.

Unlike many other motorsports events, the Pikes Peak International Hill Climb presents a unique challenge to riders. Not only are bikes built to be fast, but they must also be equipped to handle a very steep climb. From the beginning of the race, riders are expected to rise more than 9,000 feet in elevation to eventually reach the summit, which is 14,000 feet above sea level.

The Spider Grips/Ducati team knows a little something about the race, having claimed the title in 2008 and 2010. The first rider for the team is Greg Tracy, who was responsible for both Ducati wins and has triumphed in the competition six times total. Carlin Dunne, meanwhile, has never won at Pikes Peak, but is the reigning King of the Hill and knows a thing or two about conquering steep inclines.