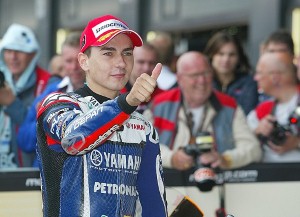 Current MotoGP points leader Jorge Lorenzo has re-signed with Yamaha on a two-year contract, ending speculation that the rider could head to another team at the end of the season.

It seems there's a rider carousel just about every season in MotoGP, and the end of the 2012 season could have been one of the most intriguing had Lorenzo not opted to stay put. With Casey Stoner shockingly announcing his retirement, a major spot opened up on the Repsol Honda team, and there were rumors Lorenzo might be the one to fill it.

Lorenzo's re-signing with Yamaha has ended that speculation, which means Honda will be looking for a new rider elsewhere. Nearly all of the major riders' contracts are up at the end of the year, which could mean quite a few moves being made.

"I am extremely happy to have signed with Yamaha for two more years," said Lorenzo. "They've made great efforts to retain me in the factory team so I want to thank all those involved at Yamaha for this. I've been treated like part of the Yamaha family since 2008 and I love working with them. It has always been my first option to stay here and so I'm happy that this important negotiation has finished with such a positive outcome."