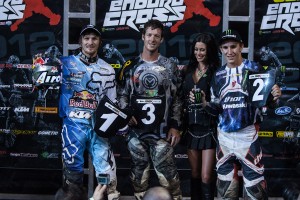 Red Bull/KTM rider Taddy Blazusiak claimed his fist win of the 2012 AMA EnduroCross Series at the second round of the circuit held at Power Balance Pavilion. His teammate, Factory FMF/KTM rider Mike Brown, also put in a good ride to secure 5th overall for the night.

In his heat race, from an inside gate, Blazusiak jumped out front quickly to take the holeshot. Blazusiak led all six laps of his heat race to easily transfer to the main event.

Brown also had a great start to his heat taking the early lead after the first corner. Unfortunately, Brown suffered a crash on the second lap but was able to recover without losing the lead. He continued to pull ahead until a small mistake on the next lap cost him the lead. He was able to hang on to 2nd place to take the final transfer spot to the main event.

In the main event, Blazusiak was off to what seemed to be an undesirable start in 8th place before making substantial progress to pass into 3rd by the second corner. Blazusiak battled with Destry Abbott for the next two laps before passing him on lap three to take over the runner-up position. Blazusiak then set to work on the lead ride of Kevin Rookstool. Blazusiak was able to make a smooth pass to takeover the lead on lap four. From there, he began to stretch his lead for the remaining laps. At the conclusion of the race, Blazusiak crossed the finish over 10 seconds ahead of the 2nd place ride to claim his first victory of the season. 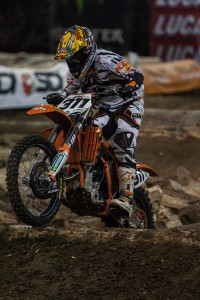 Mike Brown put together an impressive race to climb from a near last place start to pass into 5th overall - Photo: Drew Ruiz[/caption]

Now two rounds into the series, Blazusiak holds a 10 point lead in the series standings. "I am very happy to win this race," commented Blazusiak. "I really liked the track and the racing was fun. I want to extend my thanks to the entire KTM crew. I am looking forward to working with them over the next few weeks to prepare for the Summer X-Games."

KTM had a great showing in the Women's class with 8 of the 12 riders on orange. Factory FMF/KTM rider Maria Forsberg got the holeshot in the main to take the early lead. A crash in the rock turn caused her to lose two spots to KTM riders Louise Forsley and Chantelle Bykerk. Forsberg was held up by lappers stuck in the matrix on the final lap and was unable to make a charge back to the lead. Forsley went on to take the win followed by Bykerk and Forsberg.