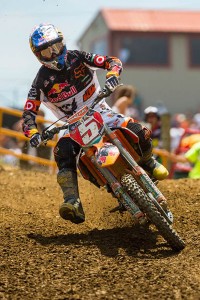 Stewart, racing for Yoshimura Suzuki, started off the season strong with two wins in a row, but suffered an injury last week to his wrist. The rider attempted to soldier on and continue racing this past weekend, but struggled throughout the first moto, ultimately finishing fifth as Dungey cruised to the win.

"Halfway through the first moto I could barely hold on," said Stewart. "I was struggling a bit [because] I got a bad start, but I was working my way up. I was trying to do my best to hold on and I almost fell over a few times."

Stewart opted not to compete in the second moto, which was more of the same for Dungey. The KTM rider had a bit of a challenge from Mike Alessi, who finished second, but ultimately won easily and built on his point lead. Dungey is now up 42 points on Alessi, with Kawasaki's Jake Weimer in third both overall and for the weekend.