[caption id="attachment_13235" align="alignright" width="300" caption="Jorge Lorenzo had a major win at his home track of Catalunya in Spain."] 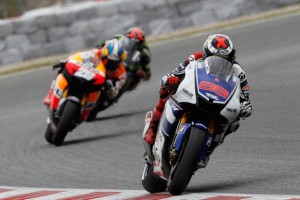 While Casey Stoner entered the MotoGP season as the clear favorite for the championship, the story of the year so far has been the riding of Jorge Lorenzo. It seems Stoner has certainly lost his edge after publicly announcing his retirement at the end of the year, and since then Lorenzo has stepped up to fill the void.

Coming off of a major win at his home track of Catalunya, Lorenzo looked equally dominant during the one-day test at Aragon Motorland Circuit. MotoGP riders will not compete on the track at Aragon until September, but Lorenzo believes it was critical to get some time in on the track, according to Crash.net.

"This test has been very important because it's not easy to find the best set up for the 1000cc bike here as there is so much change from the 800," Lorenzo told the news source. "We tried the engine again like we did in Barcelona. There wasn't so much difference so the engineers now have to make a decision for moving forward. They will consider the data from today to help them."

That crucial data and feedback will not be available to the Repsol Honda team. After learning that the front motorcycle tires were not ready for their bikes, both Casey Stoner and Dani Pedrosa elected to sit out of the test. That allowed Yamaha to dominate the proceedings, with the top four bikes all from the manufacturer. Lorenzo had the fastest time, followed by Ben Spies, Cal Crutchlow and Andrea Dovizioso. Ducati's Hector Barbera was the best of the non-Yamaha competitors.