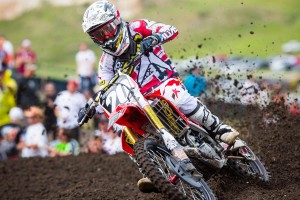 Barcia began the day by winning the first moto and leading for all 16 laps. The Honda rider didn't grab the holeshot, but did get out in front by the end of the first lap and never really had to look back.

The second moto was more of a challenge. Baggett pulled away early, while Barcia dueled with Ken Roczen for second place. Roczen eventually crashed on the final lap, allowing Barcia to take second. Since Baggett could only manage a third-place finish in the first moto, the second spot was enough to win Barcia the weekend.

With his victory, Barcia is now just 16 points behind Baggett in the standings. Roczen is a challenger for the championship as well, only 3 points behind Barcia in third place.