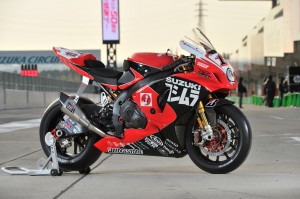 The Yoshimura Suzuki GSX-R1000L2 to be raced by Leon Camier, Josh Waters, and Nobuatsu Aoki in the upcoming 2012 World Endurance Suzuka race.[/caption]

FIXI Crescent World Superbike rider Camier will join Australian Superbike Champion Waters and Suzuki Factory test rider Aoki for the 35th Anniversary event on July 29, where Yoshimura will also celebrate its 35th participation in the race - the only team to have competed in every single race.

Said Team Manager Yohei Kato: "This year we are collaborating with Team FIXI Crescent Suzuki in the World Superbike Championship Series by developing and supplying the engines and exhaust systems and through this regular entry into the World's top Superbike race series, we have gained much more and different experience from the wild card entries we had last year. At the Suzuka 8 Hours, we will put all know-how into the Yoshimura GSX-R1000L2 and we hope we can show the high potential and performance of our race bike.

"We have three excellent riders in our team; Josh Waters, who showed his potential in his first Suzuka race last year, Nobuatsu Aoki, who is a veteran rider with great ability and knowledge of machine set-up, and as a new rider for our Suzuka 8 Hours team, we welcome Leon Camier from the World Superbike Championship Series. We are aiming our fifth victory at the Suzuka 8 Hours and we will try our best."


"I am absolutely thrilled to be racing in the Suzuka 8 hour this year and honoured that Yoshimura has asked me to take part in such a prestigious race. I have done the Suzuka 8 hour race three times before (in 2005, 2006 and 2007) but have never been particularly successful there, so I am hoping that this year will see a change of luck.

"It's an amazing race and probably the hardest - both physically and mentally - that a racer does. The temperatures are usually very hot and the track is so physical, it just saps all your energy.

"It is a hard track to learn because it is so long and it is also technically very demanding. I will have to learn how to ride the Yoshimura GSX-R on Bridgestone tyres, but hopefully that will not be too much of a problem and I can run consistent lap times. My goal is to get to grips with the tyres as soon as I can, keep up a good pace; and still be fast at the end of the race."

"I am very excited to be joining the Yoshimura Suzuki Suzuka 8 hour team for 2012 and I would like to thank both Suzuki and Yoshimura for offering me the great opportunity. Last year we came very close to winning, I learnt a lot and now I know how hard the Suzuka 8 hour is.

"I hope I can help the team to get even better result this year. My team mates for 2012 are both great riders and I am looking forward to working with them."

"This is my 5th time racing at the Suzuka 8hour Endurance race with Team Yoshimura. I am really exited to race with the multi-national team this year and I hope I can assist these young riders. Based on the WSBK development, the engine should perform well and I am looking forward to riding the Yoshimura GSX-R1000L2.

"I have been racing for 30 years and I have raced in Moto GP races, mostly in Japan. It is well known that Moto GP is the fastest motorcycle competition in the World but I would say the Suzuka 8 hour is the toughest endurance race in the World. It should be extremely competitive again this year, but my target is climbing back to the top of the podium with my team mates. Yes, we need to win!"