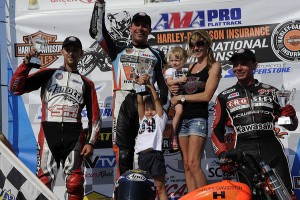 Willie McCoy has done it again.

Just a few months after the 42-year-old rider shocked the motorsports world by winning the AMA Grand National Race at the Springfield Mile, McCoy was on top once again at the famous track, winning the Memorial Day edition of the race. The Springfield Mile is held every year on both Memorial Day and Labor Day, and McCoy's legendary Labor Day victory was thought to be a once-in-a-lifetime shocker.

Yet McCoy proved this past weekend that the victory was no fluke, as the veteran rider held off competitors half his age to pick up the victory. McCoy, Jake Johnson and Bryan Smith were ultimately separated by just 0.033 seconds, according to Cycle News, but it was McCoy who was out in front when the checkered flag flew.

"Winning Springfield one time is a dream come true," McCoy told Cycle News. "Winning it two times in a row in unbelievable. On the last lap I ran it hard into turn three and had a good run. When I saw him [Smith] dart to the inside coming out of four, I drift wide and figured I would either win it or get passed by a bunch of guys. I had to go for it. I knew I couldn't follow Bryan and beat him."