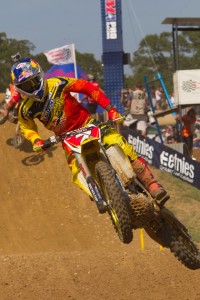 picked up his second overall win of the AMA Motocross season and is now undefeated in the competition after holding off a hard-charging Ryan Dungey at Freestone.

Stewart went into the race riding high after notching two wins during the first Motocross weekend of the season, and continued his fine form with a victory at Freestone. Stewart recently joined the Yoshimura Suzuki team and the marriage already appears to be paying dividends for the manufacturer and rider alike.

Stewart jumped out to an early lead in both motos, but had to contend with Dungey on his heels at just about all times. However, Dungey could never make the pass to get by the Suzuki rider, and was forced to settle for second in both races. Mike Alessi earned his second-straight podium in third place with a 5-3 finish.

"I thought my day went good," said Stewart. "It was a tough one, but fun. I got two good starts, made quick passes, and set the tone with a good pace. Ryan rode really well, but I did my own [thing] out front. I knew he'd be there the whole time. I felt like we were even today and if he had gotten out front, he could have done the same thing."

Stewart now holds a 14-point advantage over Dungey in the overall point standings.