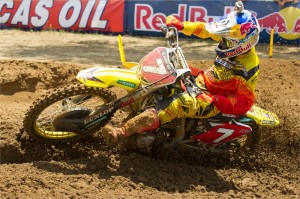 Yoshimura Suzuki's James Stewart raced to his fourth-consecutive race victory on the RM-Z450 at the 2012 Lucas Oils AMA Motocross Championship second round at Freestone in Texas at the weekend.

Sporting the points leader's red number plate for the first-time ever, Stewart was a force to be reckoned with in Texas: In the first moto, he got a good start on his Yoshimura Suzuki RM-Z450, took the lead on the first lap and went on to gap the field and take the win. In the second moto, he again got out front in short order, but this time the pressure from the competition was more intense.

Said Stewart: "It was a good race. It was warm, but I was able to get two good starts and I actually led every lap. We made a few changes to the Yoshimura Suzuki RM-Z450 after the first moto and the team's just gelling. We had an hour and 10 minutes worth of battle and I was able to get the job done. Now, we're going to Colorado, and Lakewood is not one of my better tracks. But we're going in there with the red plate. Also, it's at altitude so it'll be another tough race, but the team has a really good set-up for me with the Yoshimura Suzuki RM-Z450 and we'll do our best to put it on the podium."

Yoshimura Suzuki team mate Brett Metcalfe suffered some bad luck in both motos but rallied before the day's end. In the first moto, the Australian got a good start but an error resulted in his having to work his way back to 13th. In the second moto, Metcalfe led going into the first turn but ran wide and settled into seventh. He then turned it up a notch but suffered a minor get-off. Undaunted, Metcalfe remounted and charged through the field to 10th to give him an eighth-place finish overall. 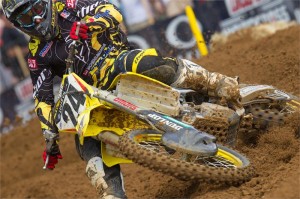 Brett Metcalfe is looking forward to Colorado and getting up front and staying up there.[/caption]

"I felt like I rode really well in Texas," said Metcalfe. "It was just a tough track to come from behind on. In the first moto, I got a good start on the Yoshimura Suzuki RM-Z450 and then I spun it out and had to come from behind to 13th. In the second moto, I got a real good start but went way too wide in the first corner and dropped back a little. On the first couple of laps, I picked off some guys and was sitting in a good position. But I could see the leaders were getting away so I tried to force something on a tough braking section and got sideways and went down, so it was a tough break. Now, I'm looking forward to Colorado and getting up front and staying up there."

Team Yoshimura Suzuki Racing's next event is the third round of the 2012 AMA Pro Motocross Championship on Saturday, June 2nd, at the Thunder Valley National in Lakewood, Colorado. 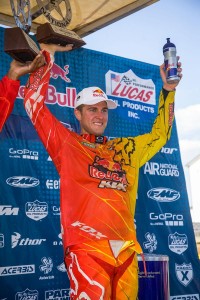 Red Bull/KTM Factory rider Ryan Dungey earned his second podium finish of the season with a pair of 2nd place finishes placing him in the runner-up spot at the second round of the Lucas Oil Pro Motocross Championship held at Freestone Raceway.

The hot temperatures and demanding terrain was an obstacle for most, but Dungey came prepared. He rocketed his KTM 450 SX-F off the line at the start of the first moto to round the first corner in 3rd. He moved around Nico Izzi on the second lap to take over 2nd place. From that point on it was a 17 lap race to the finish as he trailed James Stewart by less than a bike length throughout most of the moto as he challenged for the lead. On the final lap, a few lappers came into play and halted Dungey's momentum. Although he did not grab the lead, he was able to put in a tremendous ride for 2nd place.

The temperatures continued to rise but Dungey prevailed. His conditioning paid off and he jumped out to a better start in the second moto. He was in 2nd place off the start and began his chase to track down Stewart. The two riders pulled away out front never more than a second between them. Dungey and Stewart continued to better each others lap times throughout the entirety of the race. Dungey's fitness came into play as he continued to push each lap to pressure Stewart. The two frontrunners were able to pull out over a minute ahead of the 3rd place rider. At the end of the battle Dungey maintained his 2nd place position and earned 2nd overall for the day. After two rounds, Dungey sits 2nd in the overall series point standings. 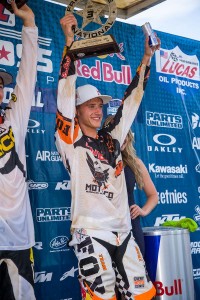 Ken Roczen backed up his first round results with another podium - Photo: Hoppenworld.com[/caption]

Red Bull/KTM Factory rider Ken Roczen backed up his first round results with another podium at the second round of the Lucas Oil Pro Motocross Championship Series held at Freestone Raceway with a 3rd place overall finish.

The young German rider, leaped off the line to a great start in the first moto. He rounded the first lap in 3rd position and made a pass for 2nd early into the second lap. He remained inside the top three throughout the length of the moto to finish 3rd overall at the end of moto one.

His teammate, Marvin Musquin, also had a great start in the first moto. He was inside the top five and was able to maintain his pace throughout the 17-lap race. "My hand felt much better this week and I was able to train and build my fitness," commented Musquin. He rode strong to finish 5th in the first moto.

The second moto did not start as well for either Red Bull/KTM rider. Both riders garnered a top ten start but struggled to make passes early on. By the fourth lap, Roczen had moved from 8th to 4th position but the leaders had begun to pull away out front. He maintained a steady pace and held on for 4th in moto two. His 3-4 results earned him 3rd overall for the day. 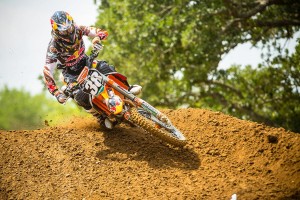 Musquin started 10th in the second moto and was able to move up two positions by the third lap. By lap six he had moved into 6th place. Unfortunately, a couple small mistakes cost him two positions on the next couple laps bumping him down to 8th. He was able to hang on to 8th place to secure a top ten finish. His 5-8 results placed him 6th overall for the day.