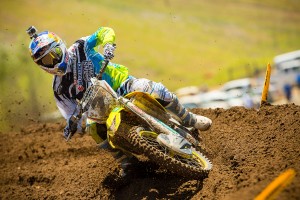 James Stewart's relationship with Team Yoshimura Suzuki got off to a great start when the new rider won both 450cc motos at the opening round of the 2012 Lucas Oil Pro AMA Motocross Championship.

The popular rider recently parted ways with Joe Gibbs racing and signed with Suzuki a week before the season began. At the opening round of Hangtown, that decision quickly paid off for the Japanese brand. Stewart won the first moto in dominant fashion, grabbing the holeshot early and holding off Andrew Short in the early laps.

"[Today] went better than I thought," said Stewart. "I thought I'd come and struggle a bit, which I did a little. This [season] is one of those things where you continue to build and we got a good start on it. I'm just here to enjoy it. I didn't come to be the fastest; I came to learn the motorcycle. Everything is new. We've got a long way to go. I've been away for a while, but I don't realize how much I miss it till I'm gone."

In the second moto, it was clear Stewart had learned the motorcycle more quickly than expected. Stewart once again turned in an excellent performance in the second race, dueling with Ryan Dungey and ultimately getting the win.

The two wins place Stewart on top of the standings, and with Ryan Villopoto out of the competition entirely due to injury, Stewart could easily be the favorite to win the championship.